Call Us Find Us 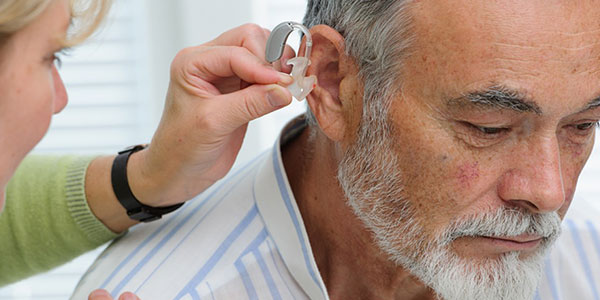 The Process Of Hearing Loss

Outer Ear - The outer ear is made up of the pinna, or auricle, and the external auditory canal. The pinna collects and funnels sound down the ear canal. The ear canal is curved, “S” shaped, and about 1 inch long in adults. It has hairs and glands that produce wax called cerumen. Cerumen helps to lubricate the skin and keep it moist.

Inner Ear - The inner ear has two divisions: one for hearing, the other for balance. The hearing division consists of the cochlea and the nerve of hearing. The cochlea is snail-shaped, bony structure that contains the sensory organ for hearing called the organ of Corti. The organ of Corti releases chemical messengers when the vibrations from the stapes activate its tiny hair cells. These then excite the nerves of hearing which carry sound to the brain.

Central Auditory Pathways - The central auditory system is a complex network of neural pathways in the brain that is responsible for sound localization, speech understanding in noisy listening situations and other complex sounds, including music perception.

The Process Of “Hearing”

Sound is transformed into mechanical energy by the tympanic membrane. It is then transmitted through the ossicles to the inner ear where it is changed again into hydraulic energy for transmission through the fluid-filled cochlea. The cochlea’s hair cells are stimulated by the fluid waves and a neurochemical event takes place that excites the nerves of hearing. The physical characteristics of the original sound are preserved at every energy change along the way until this code becomes one the brain can recognize and process.

Hearing loss misleads our brain with a loss of audibility and introduces distortion into the message that reaches the brain. Changes in the effectiveness of the brain to process stimuli, from head trauma, disease, or from aging, can result in symptoms that mimic hearing loss. The ears and the brain combine in a remarkable way to process neural events into the sense of hearing. Perhaps it’s fair to say that we “hear” with our brain, not with our ears!

The causes of hearing loss are varied and their impact on hearing is variable. Sometimes the cause or etiology is readily apparent, such as a wax build-up in the external ear canal or an ear infection. At other times, the cause of the hearing loss is presumed or indefinite given current levels of technology and the information they provide, such as in cases of sudden onset or non-syndromic sensorineural hearing loss.

How & Why Hearing Is Lost